This post, written in 2017, continues to receive a lot of attention. I have taken the topic up in more detail in a series of posts started in 2019.

While I still stand behind what I have written here, this first post was based more on literature research, some personal experience and reflection. The 2019 posts are the result of a Special Interest Group (SIG) on Culture and Compliance in Turkey. I have initiated this group within the Turkish Ethics and Reputation Society TEiD in January 2019. In the SIG we are conducting a series of workshops in which we discuss and analyze Turkish culture by its dimensions according to the 6D model of Geert Hofstede – one dimension at a time.

The members of the SIG come from a variety of industries, multinationals and Turkish corporations and SMBs. They are all Turkish nationals, so the outcomes of our workshops are not the view of a foreigner from a different cultural background but those of Turkish Ethics & Compliance professionals (or related functions) about their own national culture and its impact on the effectiveness of Ethics & Compliance programs in Turkey.

Culture, noun: the customary beliefs, social forms, and material traits of a racial, religious, or social group; also: the characteristic features of everyday existence (such as diversions or a way of life) shared by people in a place or time

Even before I started working as a Compliance Officer in a pharmaceutical company in Turkey, I had been fascinated with Turkish culture and the specific challenges it poses to Compliance Management for a long time.

I first came to Turkey in 2005 as an internal auditor and in the course of the ensuing three audit engagements over the course of three years, we were faced with several conflict of interest cases and a fraud scheme.

This was the first sentence in Turkish I was taught by the colleagues from the local Finance function during the first days of the first engagement, laughing when they provided the audit team with enough sticky-sweet bakery for a football team – every single day. Later in my career I came again to Turkey as an auditor, but in a different company and industry, and found some instances of at least questionable behavior by a member of senior management that wasn’t challenged by anyone locally because he as a senior manager stood in a certain sense above the rules.

In parallel, having being married now for close to ten years to a Turkish wife and having got to know well the extensive Turkish family, I have grown to understand and appreciate, even to love, Turkish culture also from a private perspective, which has given me an enhanced perspective also in my professional life.

When we were still living in Germany, I sometimes said jokingly that if I ever wanted a real challenge, I would go to Turkey and research about Turkish culture and Compliance. The story of how I came to work in Turkey has to be told as well, in a separate post, because it is also a story of “applied integrity”. Suffice it to say here that the opportunity arose sooner that I had expected.

My analysis is based on the work of Prof. Geert Hofstede, a Dutch scientist in the area of intercultural learning, who conducted a large-scale empirical study with IBM about the differences of national cultures at the end of the 60s. Since then, the Hofstede Institute has been continuing and updating his work. Although the results have been discussed controversely, I haven’t found a better model yet in my personal research that corresponds to my personal experiences and observations so well.

The Hofstede model breaks down national culture in six characteristic dimensions (the sixth one having been added quite recently):

Power Distance describes how power is distributed in a society. Is it distributed fairly equally or concentrated? Is the society very hierarchical? How are decisions taken: by participation or top-down? And is this viewed and accepted as normal by society?

Uncertainty Avoidance means how the society deals with unknown situations; e.g. by analysis, planning and control but also by rituals, traditions, rules and conventions, superstition as well as rules-orientation; worries about health, money and the future belong also to this context; as well as openness for news, innovation, foreign people.

Long-term (Short-term) Orientation characterizes in how far the society’s interest is focused on short-term success or long-term, sustainable solutions.

Indulgence (Restraint) finally means, how openly the society deals with the needs of individuals; enjoyment in spare time, openness with regards to sexual life and orientation.

Turkey in the Hofstede model

On a scale of 1 to 100 points used in the Hofstede model, Turkish culture is depicted as follows below in comparison to German culture.

Using the online database of the Hofstede Institute, any two or even three countries can be chosen for comparison. I choose Germany as a comparison for the obvious reasons that I am German and received my primary socialization in Germany. Germany is useful from a Compliance perspective also for the reason that Germans are widely perceived as being principle-oriented and rules-observant (if not obsessed), disciplined and order-loving, honest, critical and direct (to the extreme of being rude), rational and organized.

Analysis of the Culture Dimensions for Turkey

The Hofstede Institute characterizes Turkish culture in the Power Distance dimension as follows:

Dependent, hierarchical, superiors often inaccessible and the ideal boss is a father figure. Power is centralized and managers rely on their bosses and on rules. Employees expect to be told what to do. Control is expected and attitude towards managers is formal. Communication is indirect and the information flow is selective. The same structure can be observed in the family unit, where the father is a kind of patriarch to whom others submit.

Hierarchy as an inherent trait of culture is also evident in everyday communication: Persons of authority are politely addressed by title and not directly by name, starting in the family: the younger siblings call the older brother ağabey and the older sister abla; in the office, employees higher up in the hierarchy are addressed respectfully as bey/hanım (I am Michael bey) whereas on the same level or hierarchically downwards, the first name is used.

Regarding the low Individualism of Turkish culture, the Hofstede Institute writes:

Turkey … is a collectivistic society. This means that the “We” is important, people belong to groups (families, clans or organisations) who look after each other in exchange for loyalty. Communication is indirect and the harmony of the group has to be maintained, open conflicts are avoided. The relationship has a moral base and this always has priority over task fulfillment. Time must be invested initially to establish a relationship of trust. Nepotism may be found more often. Feedback is always indirect, also in the business environment.

In the examples in the introduction, I have already described these forst two important factors as differentiating the Turkish culture so much from my own German culture and – most importantly for Communication – from the principles underlying the anglo-american idea of Compliance as it is being enforced globally through the FCPA and more lately the UK Bribery Act.

Quod licet Jovi non licet bovi. (What is allowed for the Lord is not allowed to his cattle. )

This factor combination of a high Power Distance and Collectivism is problematic from a Culture of Integrity perspective more so than directly from a Compliance perspective.

Turkey has a tendency to the feminine side of this cultural dimension.

This means that the softer aspects of culture such as leveling with others, consensus, sympathy for the underdog are valued and encouraged. Conflicts are avoided in private and work life and consensus at the end is important. Leisure time is important for Turks, it is the time when the whole family, clan and friends come together to enjoy life. Status is shown, but this comes more out of the high PDI [Power Distance Indicator].

In this context it is also interesting to mention the expression iş arkadaşı (work friend) for colleague: Contrary to Germany, where colleagues usually are anything but friends, but just the people you have to work with because you are in the same department. There are German proverbs like “You can choose your friends but not your colleagues.” The Turkish expression shows a different perception that fits with the higher Collectivism score as well as the more feminine tendency of society.

This cultural dimension score is very high in Turkey.

Turkey scores 85 on this dimension and thus there is a huge need for laws and rules. In order to minimize anxiety, people make use of a lot of rituals. For foreigners they might seem religious, with the many references to “Allah”, but often they are just traditional social patterns, used in specific situations to ease tension.

However, having rules and laws does not mean following them and Turkey isn’t particularly good at getting your rights using the legal ways. There’s a lack of domestic motivation to fight corruption, because people are generally unaware of corruption’s effect on society, enforcement is low in the absence of sufficiently effective penalties and public investigation and enforcement lacking qualified personnel resources.

Both cultural dimensions do not show a very pronounced preference in the Hofstede analysis of Turkey so no dominant cultural preference can be inferred.

Communication is closely tied to the dimension Individualism (Collectivism). Turkey as a collectivistic culture has a high-context communication style while Germany has an (extremely) low-context style. The following table and charts illustrate the differences quite clearly. 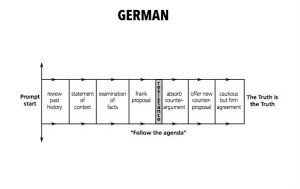 Source: based on https://hbr.org/2015/12/getting-to-si-ja-oui-hai-and-da (Turkey added myself based on my own judgment.)

The combination of a high Power Distance with low Individualism (in conjunction with more feminine cultural tendencies) leads to specific challenges for an Integrity Culture according to the predominant view from an anglo-american perspective as driven by global FCPA and UKBA enforcement. This is also reflected in Turkey’s score in the Transparency International Corruption Perception Index, which has been steadily declining since 2014, and it’s position in the TRACE matrix. It’s up to us as Integrity & Compliance professionals to understand and then address these challenges specifically when designing and implementing our programs in Turkey.

This is particularly important for Turkish subsidiaries of multinationals. In these, Compliance programs are largely driven by corporate central functions. Local senior management in Turkey may be composed of individuals with international experience, partly expatriates, with intercultural experience, who are more familiar to the anglo-american principles of Compliance. But the same managers may on the other side not be aware of the inherent characteristics of their own national culture and the impact their behaviors have on the members of their organization as a consequence of these culture dimensions. In addition, the vast majority of the members of the organization in Turkey will have experienced their primary socialization fully within the context of Turkish culture and hence will be fully living and working within a Turkish socio-cultural mindset. This means that any Integrity & Compliance training and communication will be received and understood by them through the frame of reference of Turkish culture.

By developing an understanding of this cultural frame of reference, Compliance programs in Turkey should particularly focus on:

We cannot change national culture and certainly shouldn’t try to. We have to understand that what we call company culture is embedded into a much stronger and much older national culture, which people literally have taken up with their mother’s milk. We have to respect this culture and learn to work within it, using its characteristics to the advantage of our objectives as Integrity & Compliance professionals.